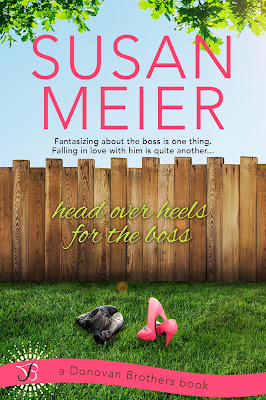 Fantasizing about the boss is one thing. Falling in love with him is quite another…

Isabelle Cooper's in big, big trouble. Her flower shop? Well, it was just bought by the man she’s had a crush on forever. Her new boss, Devon Donovan, is a tall glass of melt-in-your-mouth hotness. The problem? Devon is definitely not interested in love. No ifs, ands, or buds about it.

Devon knows Isabelle has been crushing on him since college, but buying her business shouldn’t be a problem. Not only is she his employee, but as the eldest Donovan brother, he’s too busy protecting the family fortune for romance. But tomboy “Izzy” is all grown up now. And he’s finding it impossible to resist her, no matter how hard he tries...

I'm really on the fence with this book; I wanted to like it because the blurb sounded like it's going to be an entertaining read, but the more I read it the more I wanted reach through the pages and shake some damn sense into both Isabelle and Devon. There were a few incidents in the story that boggled my mind, which admittedly doesn't take much at times, but there you have it.

I didn't understand exactly why Isabelle's parents sold the business to Donovan Inc. I understand they wanted to retire, but since they pretty much paid for Isabelle's college education and she gained her MBA in order to take over the shop, why sell it to another company? And with the stipulation that Isabelle be kept as just the manager of the shop? Talk about a slap to the face. And while Isabelle has always had a crush on Devon, he doesn't do relationships or believe in love. But you have to know about his childhood and why that has shaped him into the man he is today.

What I couldn't get with is that while Devon is attracted to Isabelle, he tells her that they won't be in a relationship, but he is willing to have an affair with her. And she goes along with it? I'm sorry, but if my lifelong crush tells me that we can be together but it will have to be in secret, I'm chucking him the deuce and rolling out. There's only so much I'll do to be with someone and I have to sneak around like a thief in the night? Love peace and hair grease homie, I ain't that chick.

I finally cheered when Isabelle finally got her act together, although I wish it had occurred a bit earlier in the story than when it did, because the ending wouldn't have felt so rushed.

ARC provided by publisher via Netgalley in exchange for honest review.

Susan Meier is the author of over 60 books for Harlequin and Silhouette, Entangled Indulgence, Red Hot Bliss and Bliss and one of Guideposts' Grace Chapel Inn series books, THE KINDNESS OF STRANGERS. In 2013 she lived one of her career-long dreams. Her book, THE TYCOON’S SECRET DAUGHER was a finalist for RWA’s highest honor, the Rita. The same year NANNY FOR THE MILLIONAIRE’S TWINS was a National Reader’s Choice finalist and won the Book Buyer’s Best Award.


Susan is married with three children and is one of eleven children, which is why love and family are always part of her stories.