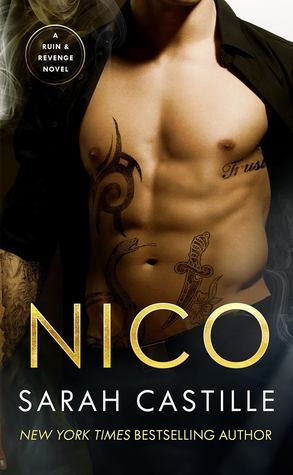 
A DANGEROUS PROPOSAL
Las Vegas Mafia boss, Nico Toscani, is used to getting what he wants, whether it is having the City of Sin under his rule or a beautiful woman in his bed. But when he meets his match in the gorgeous, headstrong Mia Cordano, the daughter of a rival crime lord, all bets are off. . .
Sexy computer hacker, Mia, struggles to break free of her ruthless father’s Mafia ties…but she can’t resist the powerful and seductive Nico, who will stop at nothing to possess her. With their families locked in a brutal war for control of the city, Mia and Nico enter into a forbidden game. Will they surrender to the passion that burns between them—and risk tearing apart their families? Or will Nico be forced to betray the only woman who sets his blood on fire?
Nico is the first book in a full-length, standalone series by New York Times bestselling author, Sarah Castille, set in Las Vegas and featuring deliciously sexy mafia bosses and the women who can’t help but love them.

“Hacking is for men. This stuff . . .” He waved vaguely at her outfit. “Security work is for men. It’s a dangerous business. It involves skill, deception, focus, and intelligence.”
Her eyes blazed, and she crossed the floor to lean over his desk. “Intelligence? I was at the top of my class at UCLA. If you had even bothered to read the resume I sent your casino manager, you would have seen I’ve had contracts from multi-national corporations, state and local governments. I was even invited to submit a tender to the FBI. I got those contracts myself. I run a very successful business with the help of two on-site employees and a floating team of five online hackers.”
She paused for breath, and Nico tried to tear his gaze away from her magnificent breasts now only inches away from his face, but she wouldn't let him.
“This . . .” She cupped her breasts over the corset and gave them a shake, sending all Nico’s blood down to his groin. “Ridiculous outfit is me doing my job and the only reason I was caught was because your security guard has the same antiquated, sexist, misogynistic attitude as you and decided to pinch my ass. I jabbed my knife into his thigh to defend myself as any woman being sexually harassed is entitled to do.”
For the first time in his twenty-eight years, Nico had nothing to say. Captivated, entranced, and fiercely aroused by the infuriated, beautiful woman leaning over his desk, her face dark with indignant fury, he almost forgot she was the enemy—the daughter of the man he hated most in the world.
“If I hadn’t been distracted,” she continued, straightening up to Nico’s abject disappointment, “I would have been in and out of your control room and hacking into your system as we speak.”
“Exactly.” Unable to contain the fierce arousal coursing through his veins, Nico pushed back his chair, and rounded his desk forcing her to take a few steps back. He perched on the edge of the desk in front of her, arms folded, legs spread wide, back in control of the room, of himself. “You were distracted. A man wouldn’t have been distracted.”
Her lips pressed tight together, she brazenly stepped between his parted legs. Electricity crackled between them, caused the air in the room to swelter. Unused to being challenged in any way, and never by a woman, Nico couldn't decide if she was coming on to him or about to rip out his throat.
She gave him a smile that was at once sultry and sweet. “So you’re saying” —she dropped her hand until it dangled just below his crotch— “that if I were to grab you right now, you wouldn’t get distracted?”
Adrenaline pulsed through his body in response to her challenge, and he fought the urge to slide back on his desk. Not because she scared him—he was confident he could knock her hand away before she got close—but because he was so fucking turned on, he didn’t know what would happen if she touched him.
Goddam fucking delicious.
He curled his hand around her neck, beneath the silken waterfall of her hair, and pulled her close, so close he could feel her breath on his cheek. “Do it.”

Posted by My Book Filled Life at 8:00 AM