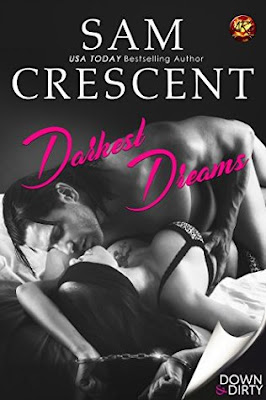 She wants him, even for a moment. He wants her…for a lifetime.

At Darkest Dreams, a club for people with certain tastes, Avery watches the mysterious Master Dominic. She wants him, but there is no way she can have him. He’s so far out of her league, and he probably doesn’t even know her name.

Dominic warns everyone: stay away from Avery. She belongs to him, and him alone. The club’s other Doms, however, issue an ultimatum: take her now or lose her. So he offers her a relationship contract they can both enjoy.

Neither Avery nor Dominic want a relationship on paper. The chemistry between them is too strong. Can they survive the changes in their relationship? Or will Avery run away when the truth about Dominic comes out?

This is a quick but really sexy and hot read. I'd not read anything by Sam Crescent before, but I really enjoyed her writing style. I love the chemistry between Dominic and Avery, it's electric, and even though Dominic is is a Dom, he still had patience with Avery and waited until she was ready to move forward, and once she was ready, he pulled out all the stops to show her how well things could be between them.

“No one gets to train with Master Dominic. He’s like the king of Darkest Dreams. No one, and I mean no one will ever own him,” Ella said.
Avery Masters stared across the Darkest Dreams BDSM club to the man that captivated every single person within the room. She had been coming to this place for over a year, and couldn’t bring herself to do anything more than watch. For this club, prior to being accepted, she had to take a test. During the test she’d been so nervous, and after finishing it, she’d been graded submissive.
“All you do is watch when you could be with any other man here,” Ella said, drawing her attention back to her.
“It’s nothing. Honestly, I’m just, I don’t know, I don’t like the thought of anyone else touching me.” The club had plenty of Masters, she simply didn’t want any of them. All of the men were Dominant, and there were a few female Dommes as well.
Ella was her friend, who also happened to love the lifestyle. They got along really well, and tended to visit the club together.
“Why don’t you just ask him?” Ella asked.
“Ask who?”
“Please, sweetie, you drool over him every time we’re here.”
“He’s very good.”
Right now Master Dominic was showing a man how to use a whip. This was what she loved about Darkest Dreams. Everyone could learn, and there would be no judgement. She didn’t know the man he was teaching, but the woman currently secured to a spanking bench looked damn happy.
Licking her lips, Avery pressed her thighs together as another wave of arousal washed over her. What was it about Dominic that called to her? She didn’t understand it. Yes, he was a handsome guy, but there were plenty of handsome men out there who didn’t get her attention. He looked hot in a pair of leather pants, but then again, she’d never seen him naked.
“I’m going to head to the bathroom,” she said, needing a distraction. She was starting to feel like a stalker herself.
“If you see a handsome man, just go with it. I think it’s the only way you’re ever going to get over your addiction to Master Dom.”
“I’m not addicted.” She didn’t stick around to see what else her friend had to say. There was an attraction, and an addiction. Was it healthy? No, it wasn’t. She hadn’t been with a guy in a long time, even before she joined the club. Now she spent most of her time comparing all men to Dominic.
The bathrooms were clear, so she didn’t linger, nor did she stare at her reflection. All she would find was fault. Her face was too round, her hips too wide, her stomach too round. At a size fourteen, she had to be one of the biggest women at the club. The only women she’d seen with Dominic were the kind that were slender, like bone slender.
Pressing her washed and dried hands to her face, she whimpered. “Just get him out of your mind. Completely, totally, out of my mind.” This obsession was going to make her a lonely, miserable woman.
Still avoiding the mirrors, she made her way outside, coming against a sudden wall of human flesh.
“Be careful there, sweetness.”
His voice.
Heat filled her cheeks, and when she looked at him she cringed, immediately looking down. “I’m so sorry, Sir, Master, erm …” she couldn’t find the right words.
My first time talking to the man of my dreams, and I’m stuttering!
“You can look at me. The club has rules for certain people and couples. Not all of them need to be followed.”
She frowned, looking up at him. “What do you mean?”
“Couples who believe in a complete Dominance and submissive lifestyle choose to do so within the club as well. Newbies are a different matter.”
“I thought the whole head bowing was a sign of respect.”
“Yes, and no. You don’t bow your head for everyone, do you?”
“No.” That would be embarrassing. She worked in an office all day. Bowing her head would just make her stand out like a sore thumb.
“You’ve never been played with, Avery.”
“You know my name.”
He leaned in close so that his lips were against her ear and whispered. “There’s a lot I know about you.”

Sam Crescent has always had a love of fiction, through her teen years she would find friendship between the pages rather than in an actual person. By the time she turned sixteen she discovered mills and boon and never looked back. She loved the quick happily-ever-after read. A guarantee that no matter what happened the heroes and heroines would always find their soul mate. After college and starting a degree, one lonely bored night she searched the internet looking for a new author to read. On that night and for the years to come she discovered romantica and erotic writing.