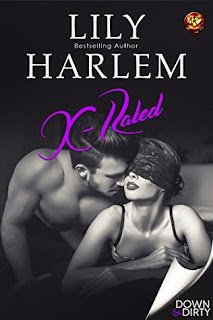 X-Rated
Down and Dirty
Lily Harlem

This weekend, Polly and Lucan work the kinks into their relationship.

When Polly is caught in a compromising position with a toy and a hardcore video, she doesn't think her husband will ever go near her again. She feels twisted, nothing like the sweet wife he married. Little does she know, she's awakened a monster by prodding Lucan's sexual beast and making him sit up and take notice.

What about Lucan's needs? He's been so busy at work that things have gotten out of his grip to the point he can't even remember his fantasies.

During a weekend of passion and turmoil, heat and pleasure, they vow to never drift apart again. Neither can imagine just how far they'll go to please the other, or how well matched their particular variety of kinks are.

This was my first Lily Harlem story and while this is a quick read, it's plenty hot! Polly and Lucan have been married for eight years and their relationship has become so routine Polly knows exactly how their bedroom trysts play out every time, hence the reason she's now adult videos and has special toys. From the synopsis you can tell her husband walks in at the wrong (or is it the right?) time.

Lucan's shocked at first, but that doesn't last long before things change for them. What I liked about this book (apart from the smexy times) is the fact that Polly didn't stray outside her marriage; they're both still in love with each other, it's just that Polly wants more when it comes to the physical aspect of their marriage. Once they're each other the initial shock of discovering (and being discovered), they indeed begin to up the spice with their bedroom time. Hands down (no pun intended), the hottest part of this book for me was when Lucan took control of the situation and the scene that occurred once he had Polly blindfolded. If I'd known it was going to be that hot, I damn sure wouldn't have read this book at work!

Polly glanced at her watch as she stepped into the house. Good, she had plenty of time to indulge herself before Lucan came home. She shut the door and ignored a bill that lay on the mat.
All day she’d steamed through her to-do list, knocking each thing off with a tick of satisfaction. She’d even forgone lunch, choosing to eat her salad at her desk. Her colleagues had soon taken the hint, when she’d given one-word answers to their chatty questions, she just wasn’t in the mood.
Some solo fun was what she needed before Lucan walked through the door. He’d toss his keys into the ceramic bowl on the dresser in the hallway, hang his jacket in the cupboard and then plant a chaste kiss on her cheek. She’d bet money on him commenting on “thank goodness it’s the weekend,” then he’d put on his old Oasis t-shirt and worn jeans, and pop a beer.
She’d cook, they’d watch TV, then it would be their usual Friday night missionary sex beneath the duvet. The highlight of his week, he always told her afterwards as he pulled his boxers back on.
Trouble was, their sex routine had become so stale if it were bread it wouldn’t be any good for even the ducks. He tweaked her nipples, rubbed her clit for thirty seconds and then pushed in. After that it was a predictable four minutes until he came.
Polly never did.
She’d tried to push him onto his back so she could climb on top and get herself off, encouraged a little oral fun with a sexy whisper, even hinted that they take a trip to a sex shop for some toys. Her suggestions were met with a big strong body that had only one plan for their bedroom sequence and, much to her dismay, had fallen on deaf ears.
Maybe she hadn’t been firm or loud enough.
For as long as she could remember, frustration burned hotly through her veins. It was an itch she couldn’t scratch. A longed for possession she would never afford. And she had no idea what to do about it.
Until, that was, a few weeks ago.
She’d been scrawling through Facebook on her laptop when she’d seen a Gucci handbag on sale—the GIF flashing excitedly—and clicked the link. Only it wasn’t a handbag sale, not by a long shot. Before she knew it a porn site had filled her screen and the wails of a woman in the throes of climax echoed around the room. She’d been alone but still glanced about the kitchen, embarrassed at the wild cries of release.
As she’d watched, heat had traveled up Polly’s spine and her cheeks had flushed. She’d squirmed on the seat and curled her toes in her fluffy pink slippers. The woman on screen was getting a good seeing to, the black man she was with pounding into her hard and fast. The camera angles were rude and crude, up close and personal. A big dark cock disappeared over and over into her wet, pink pussy.
Polly had stared wide-eyed, knowing she should turn it off. The link could be full of bugs or viruses or whatever else infected computers. But she couldn’t, she was utterly mesmerised.
The woman’s breasts jiggled, the camera gave a shot of the man’s ass cheeks as he thrust with ever-increasing speed.
Polly clenched her internal muscles as another shout of “It’s here, oh yes, oh yes, fuck me, fuck me harder,” rattled from her laptop speakers.
The man groaned, deep and guttural, a sound that spoke to Polly. When had she last heard Lucan moan like that? He seemed to hold his pleasure in, a few panting breaths, a low rumble in his throat perhaps. Why couldn’t he let go? Allow his release to be unharnessed and escape wild and free. It wasn’t as if they had any children to worry about, their house was their own, they had all the privacy a married couple needed.
Quickly Polly dumped her work-bag on the counter. She reached into the fridge for a bottle of Chardonnay and poured herself a large glass. Then, with her laptop under her arm, she headed up the stairs.
The cat was on the bed. “Tilly, come on, out you go. I don’t want an audience,” she said as she tugged the covers.
Tilly voiced a quick complaint then sauntered from the room. She’d likely been asleep all day so Polly didn’t feel guilty. Her own needs were greater and they needed seeing to.
After taking a few more big sips of wine, she began to strip. When she was down to knickers and bra she flicked on the shower in the en suite. She had at least an hour and a half before Lucan came home. The traffic was always heavy on the ring road on a Friday with everyone escaping London for the weekend. Perhaps he’d be even later than she expected. But she couldn’t count on that, she had to presume he’d be in at the earliest time possible.
She pulled the curtains closed, even though it was still daylight, then shucked her underwear.
Humming a happy tune, she twisted her hair on the top of her head and stepped into the stream of warm water. She filled her palms with coconut scented shower gel and rubbed it over her breasts. Her nipples spiked and she held her face to the water, letting it tap on her eyelids and run over her lips. Her breasts were heavy and had always been very sensitive, especially on the outer curves. She adored having the skin there lightly brushed, stroked, caressed, because it sent a tingle to her clit. Shame Lucan only thought it was her nipples that needed stimulating.
Had he always been that way?

Before turning her hand to writing Lily Harlem worked as a trauma nurse and her latest HarperCollins release, Confessions of a Naughty Night Nurse draws on her many experiences while nursing in London. Lily also self-publishes and The Silk Tie, The Glass Knot, Bite Mark, Shared, and Cold Nights, Hot Bodies have been blessed with many 5* reviews.

Lily writes MF, MM and ménage a trois, her books regularly hit the #1 spot on Bestseller lists and Breathe You In was named a USA Today Reviewer’s Recommended Read of 2014. Her latest MM novel is Dark Warriorand you can grab Part One of her series Caught on Camera for FREE! Don’t miss HOT ICE, a popular hockey series, again first book FREE!

One thing you can be sure of, whatever book you pick up by Ms Harlem, is it will be wildly romantic and down-and-dirty sexy. Enjoy!

For more information on other books by Lily, visit her website:

3 winners to receive an Alphas Unleashed eBook published by All Romance.