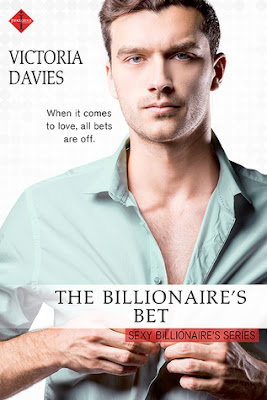 Hailey Mitchel wants one thing. Her boss. The only problem is he’s never looked at her as more than a loyal employee. At least, not until his charming business rival, Caleb, drops into her life with an offer she can’t refuse. He’s willing to bet he can make her fall in love with him in a month, and if he’s wrong, he’ll help her find the keys to her boss’s heart.

Caleb Langston wants one thing. Revenge. Hailey is his ticket to finally evening the score with his old adversary. There’s just one problem. The more time he spends with her, the less he cares about his grand plans for payback. But love is always a gamble, and soon he’ll have to choose between his past and his future. And pray Hailey never discovers the secret he’s been hiding from her.

This is the second book by Victoria Davies I've read, and I actually liked this one better than the first (Right Billionaire, Wrong Wedding). I liked this one because of the dynamics between the 3 key players in the book. I enjoyed the interactions between Caleb and Hailey, their shopping excursion was hilarious that somehow turned sexy. I will admit that I was surprised when the truth about what happened between Caleb and Alex all those years ago finally came out. Surprised that Alex went that far with his retribution towards someone he considered a brother. It pretty much all came down to both Alex and Caleb believing that they always played second fiddle to the other, not realizing the strengths they each possessed on their own, and those beliefs morphed into a bit of jealousy. I felt horrible for Hailey once she learned the truth, and what Caleb did was terrible, but Alex really wasn't any better. I do hope we get a story about Alex, since we didn't hear any more about him once he helped to get Hailey to see Caleb, but a good wrap up for this unexpected love story.

“I’m attracted to men of substance. Guess that rules you out.”

“But not my rival. Alec is your paragon of honor, isn’t he?”

“He’s an excellent man,” she agreed.

“One you just wish would walk over to your desk and sweep you off your feet, carrying you out into the sunset.”

“I’d probably break his back, and we’d both end up on the floor.”

His gaze raked down her body. “I’d be willing to risk it.”

“Luckily, you’ll never have to.”

His eyes returned to hers. “Why not just tell him?” he asked. “Confess your undying devotion and see what he does?”

She knew what he’s do. He’d get flustered trying to figure out how to tell her he didn’t return her affections. She wasn’t petite or blond, two things all his previous paramours had in common.

She wasn’t pursuing a career in acting, and she didn’t have trouble calculating the percentage of a tip. Worse, she didn’t come from old money the way Caleb and Alec did. She hadn’t grown up in that privileged world, didn’t understand the deeply ingrained rules. Alec had said more than once that when he settled down, it’d be to make a good alliance for his family. Keep all that lovely money in the right bloodlines.

No, she was nothing like the woman he would eventually fall in love with.

Not that logic stopped her from wishing for the impossible every now and then.

“You don’t know what you’re talking about.”

“All right.” Caleb straightened from the bar. “Why don’t I go ask him these questions and see what he thinks?”

Her fingers sank into his arm before he could move.

The movement had been a mistake. An admission. A certainty filled his expression that hadn’t been there a moment ago.

She shook her head, knowing she was steering toward a cliff. “What do you want?” What would buy his silence?

“I want many things,” he said, swirling the liquor in his glass. “Chief among them is you.”

“It’s just because you love the chase,” she said, rolling her eyes. “We’d never work.”

“I’m not sleeping with you in order to keep your mouth shut.”

“I don’t remember asking you to.”

She resisted the urge to stamp her foot. “Then what are you asking?”

“I’m going to make you a bet,” he said, his eyes capturing hers. “Give me one month.”

“Make you fall in love with me.”

Victoria Davies’s passion for writing started young. Luckily she had a family who encouraged believing in magic and embracing imagination. From stories quickly scribbled in diaries, her love of storytelling developed. Since then her characters may have evolved and her plots may have grown decidedly more steamy but she never lost her love of the written word. Writing is not only a way to silence the wonderful voices in her head, but it also allows her to share her passions with her readers.