With passion this intense, the question remains: Who’s gonna come out on top?

They train to serve their country. They strive to be the best. But only a select few can be... The Elite

Reckless, arrogant, and bold, Solo is as known in the U.S. Navy for his bad-boy reputation as he is for his skills as a fighter pilot. It’s a surprise to his peers, then, when he’s chosen to train and compete at the most prestigious naval aviation academy in the world.

MISSION RULES: 1.Kick everyone’s ass. 2.Do whatever it takes to win. 3.Do your best to distract the competition. 4.Especially when that competition is a gorgeous blue-eyed perfectionist who makes your blood run hot.

Disciplined, smart, and confident, Panther can’t afford not to play by the rules. As the son of a top Navy commander, all eyes are on him, and being anything less than number one is unacceptable.

MISSION RULES: 1.Keep it safe in the air. 2.Prove you’re more than Commander Hughes’s son. 3.No distractions. Stay focused. 4.Don’t fall for your competition—especially not the rebellious heartbreaker with lips made for sinning.

In the heat of the hot California sun, tempers flare and desires ignite as Solo and Panther try to resist their attraction while fighting to be number one.

With passion this intense, the question remains: Who’s gonna come out on top?

Danger Zone is book one of The Elite series and is not a standalone. Book two, Need for Speed, will release 3.27.20, followed by the final book, Classified, on 4.27.20.

A great start to this new series! While I enjoyed both Solo and Panther, I do wish we'd gotten more background information on both of them. But with them, we truly see that opposites attract: Solo is the "plan as it happens" type, and Panther is the "always have a plan, and a backup plan as well" type. I liked that Solo isn't the type to let things slide, he goes after what he wants, and that includes Panther, although it might be a bit more difficult than he expected, but there's no denying the chemistry between them, and I can't wait to see how their relationship will play out. 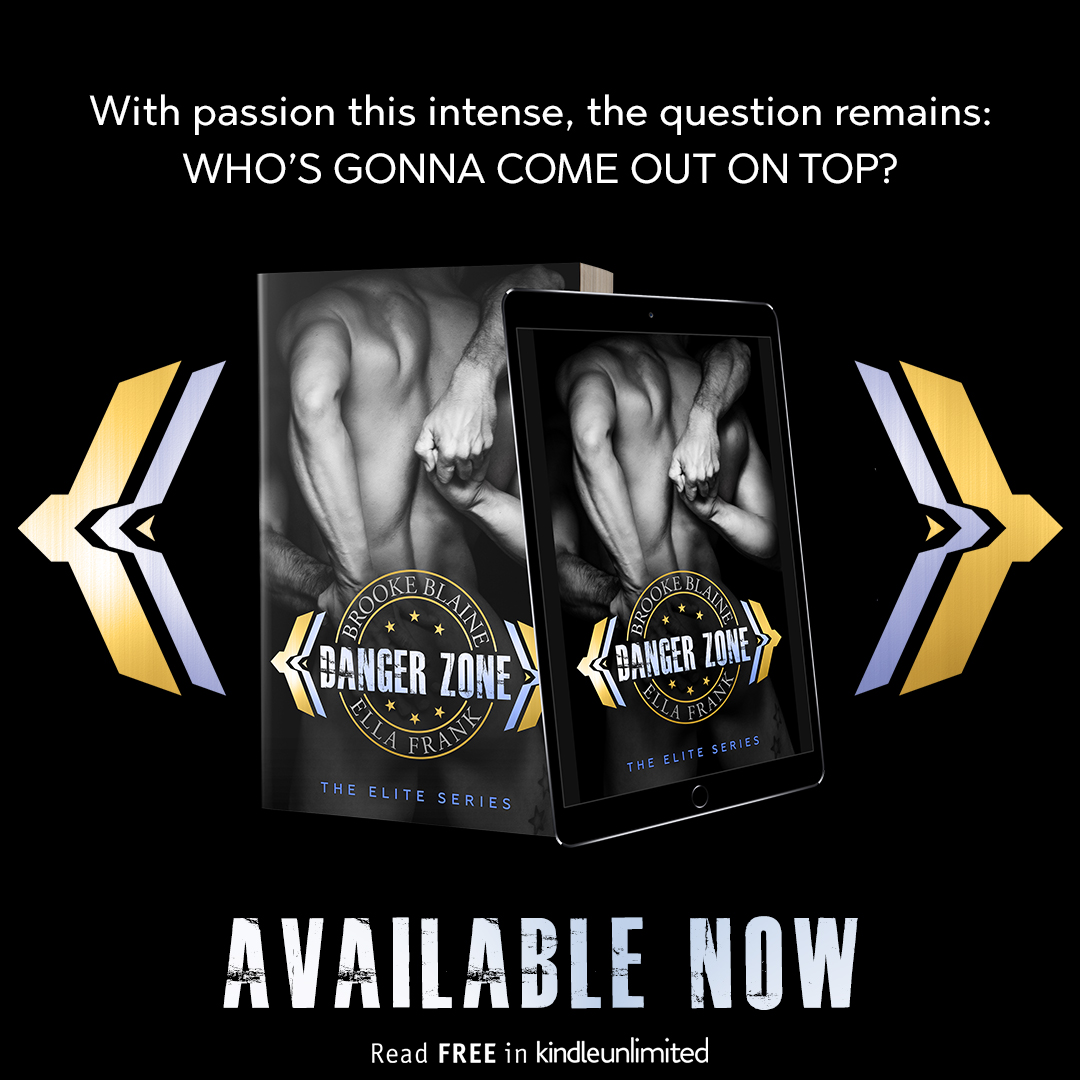 IT WAS ONE of those hot summer nights, the ones best spent lying on the beach, a cold beer in hand, staring up at the jets flying overhead, the roar of their engines shaking the sky. That was where I should’ve been. It was the smart decision, the obvious choice between being responsible and where I was headed now.

Fuck it. The next ten weeks would have me on my best behavior, and if I needed a night off to get through it, then I’d take it.

A bead of sweat trailed down my neck from beneath the suffocating heat of my helmet as I waited for the traffic light to change. The last of the sun was setting behind me, leaving the sky overhead a bruise of purples and blues, and as the light flipped to green, I gunned the engine and took off toward the dark.

Minutes later, I smoothly guided my Ducati 848 into the parking lot of the unnamed bar—God, that was sketchy as hell—and then cut the engine. There was no hesitation as I climbed off the back of my bike, removed my helmet, and clipped it to the back of the seat. Then I shrugged out of my leather jacket, feeling relief as a gust of warm wind cooled my bare skin and the sweat on my brow. As the music playing inside filtered out through the front door opening and closing, a low purr of anticipation filled my gut. It’d been too long, and I was starving.

As I walked inside, my eyes adjusted to the dimly lit room. It looked like any bar you’d find anywhere in the U.S.: cracked vinyl booths along the perimeter, an old jukebox near the fully stocked bar with TVs playing a whole lot of no one’s watching. For a Sunday, it wasn’t too packed, but that didn’t much matter considering I was here for a sure thing. Another quick sweep of the room told me he hadn’t arrived yet, so I made my way to the bar, conscious of the gazes my way, sizing me up.

“I’ll have a Heineken,” I told the bartender, resting my elbow on the bar top and dropping my jacket onto the counter. Sitting down would invite visitors, and my night was set.

When the bartender popped the top and pushed the bottle my way, I took a long swig of the ice-cold beer and glanced up at the one television not playing a sports channel. The local news was on, running a feature on the air show from the weekend, and as I watched the planes showing off maneuvers, I felt a pair of eyes watching me.

I glanced at the clock behind the bar, choosing to ignore whoever it was making my skin heat, and silently cursed out my now late date. The last thing I needed was to be standing here solo, looking like I wanted someone to approach. That wasn’t me; I wasn’t the kind to troll a bar looking for a good time. I was more into having a plan and executing it. No surprises that way. No way for things to blow up in my face.

Keeping that thought in mind, I continued to pay extra-close attention to the F/A-18 Hornet aircraft executing barrel rolls across the television screen. I thought I was doing a pretty good job of giving off a don’t come near me vibe, but a few minutes later someone stepped up alongside me, invading my personal space in a way that indicated he wasn’t merely interested in the empty seat beside me.

Dammit, this was the last thing I needed.

“Hey there, this seat taken?”

The cocksure tone of the man who’d just delivered that very unoriginal line told me he wasn’t worried in the least that I’d turn him down. In fact, before I said anything, I could feel the guy sliding into the seat beside me, his body heat warming the bare skin of my arm.

I ground my back molars together and slowly turned in the direction of my new companion, and as I prepared to give my “thanks, but no thanks” speech, my words got caught somewhere in the back of my throat.

Situated as we were, I found myself looking down into a pair of eyes the color of smooth, expensive whiskey, lined with lashes so thick it looked as though he had taken a kohl liner to them. His hair was buzzcut short and brown, his skin bronzed like some kind of sun god, and when I continued to stand there like some kind of statue, a brilliant white smile crept across a pouty set of lips.

Hell, this guy was one of the most beautiful men I’d ever seen in my life—the problem was, he knew it.

“I’m gonna take that as a no.” Those stunning eyes boldly swept over my body, from my black t-shirt to my jeans, and when they finally landed back on my face, he winked. “Lucky me.”

Arrogant, bold, and cocky. The guy staring back at me was everything I steered clear of when it came to a quick hookup. I needed reliable, trustworthy, and discreet.

Looking away, I took another sip of my beer. “Sit wherever you like.”

When he didn’t add anything to that, I took the bait. “See what?”

Out of the corner of my eye, that cocky half-smile still on his face, the guy shrugged. “Two theories. You’re either into playing hard to get, or…”

Though every instinct told me not to engage, I looked his way. When his eyes locked on mine, I realized my mistake. “Or?”

“Or you’re the aggressor.”

“The guy who goes after what he wants, not the one being pursued.”

I snorted and went back to pretending to watch the news, but then the guy leaned in, invading my space once again.

“Or maybe you’re lying.” He dropped his voice down low. “Want me to go back to the end of the bar?”

I couldn’t help the chuckle that left my throat, because as unwanted as the attention was, you almost had to give it up for the guy’s persistence. If I wasn’t waiting for someone, I may have even found him charming.

“Another,” I said to the bartender, holding up my empty bottle. Then I glanced over my shoulder, looking once again for the familiar man I was here for, but when he still hadn’t arrived, I turned my body so I casually faced the man practically begging for my attention.

This time, I let my gaze roam over him, taking in the tight fit of his dark jeans and the way the olive-green t-shirt he wore was practically a second skin over his muscled build. He was devastating in that heartbreaker-but-you’ll-love-every-second-of-it way, and damn if my cock didn’t take notice.

“Oh please, feel free. Should I stand up?” He went to stand, but I shot my hand out, pushing against his chest so he stayed right where he was. His body beneath my fingertips was nothing but hard muscle, and I licked my lips before I could stop myself. Fuck, he was tempting.

When the bartender pushed another beer my way, I jerked my hand back and reached for the bottle.

“No?” He got to his feet this time, kicking the stool away. “I can get on board with that.”

I sighed, half annoyed and half turned on. I knew which side would win in the end. “Look, I appreciate the attention, but I’ve got plans and they’re not with you.”

The guy grabbed his chest like he’d been shot. “Ouch. Brutal.”

“Better not to waste your time.”

“Sounds like that’s more of a waste of time to me. I’d never make you wait.” He leaned in, his words practically a whisper. “I’d come every time you told me to.”

Brooke Blaine is a USA Today Bestselling Author best known for writing romantic comedy and M/M romance. Her novels lead with humor and heart, but Brooke never shies away from throwing in something extra naughty that will scandalize her conservative Southern family for life (bless their hearts).

Posted by My Book Filled Life at 1:46 PM