RETRO REVIEW TOUR - For the Living by L.A. Witt 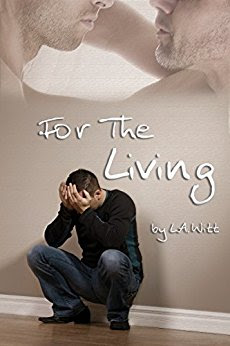 For the last year, Jay Warren has struggled to find the nerve to tell his wife he's gay. Every time he gets the chance, though, he freezes up. He's ashamed of hiding it all this time, he doesn't want to hurt her, and the guilt has been almost unbearable.

When his wife dies suddenly, Jay's conscience threatens to eat him alive.

Funeral director Scott Lawson deals with the bereaved every day, and he's all too familiar with the inside of the closet. He offers Jay some much-needed compassion and understanding, and from that connection comes a friendship that quickly - perhaps too quickly - turns into something more.

But are grief, guilt, and loneliness the only things tying them together? Or, will Scott get fed up with being used as an emotional crutch before Jay realizes what he has?