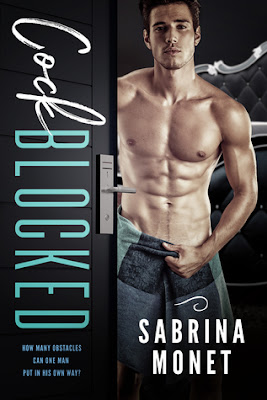 An uninvited ex-girlfriend; an overly flirtatious competitor; a completely untenable work situation…how many obstacles can one man put in his own way in the pursuit of the disinterested woman he can’t seem to get out of his head?

Camden Atwood is devastatingly gorgeous, cocky as sin and as Hollywood’s reigning “it” guy, not use to hearing the word “no” when he sets his sites on a woman. When Camden meets Kate Prescott, the ambitious, smart-mouthed new junior publicist assigned to handle him on an international press tour for his latest movie, he’s hooked from the minute his private jet is wheels up.

With a coveted promotion on the line, however, Kate has all the motivation in the world to steer clear of a romantic entanglement with her sheet-clenchingly hot new client. Camden is nothing if not always up for a challenge, especially when the game of cat and mouse is this sexy and this fun. The universe may have other plans however as it stacks the decks against this playboy in his pretty publicist pursuit.

I thought this was an entertaining debut novel with plenty of fun characters. Cam is the current manwhore about Hollywood who's developed a sudden interest in his junior publicist Kate. The chemistry between them is electric right from the start (I liked how she helped him out upon their first meeting). Of course she's just as attracted to him, but she knows her career is on the line and vows to keep their interactions strictly professional. I liked Cam enough throughout the book, but I'm over the male heroes being labeled as manwhores; I firmly believe it's time to leave that particular characterization in the past.

Cam's been against being in love after having his heart broken, especially when it's revealed who was culpable (that's some skanky ish if you ask me!) No wonder Cam does his best to stay away, and only visits when absolutely necessary. I liked seeing Cam and Kate grow closer to each other, and the sexual tension between them was fantastic and smexy hot. However, all of Kate's worries came true when the world learned about their blossoming relationship. The one thing I wish had been addressed more was the person who was responsible for leaking the photos. There was a confrontation, but that was it; I would have liked to seen more fireworks from that particular situation. But overall this is a good book and I'm looking forward to the next book in the series.