Review and Excerpt Tour for FAST RIDE
by Michelle Dayton!
We are excited to celebrate the release of Michelle Dayton’s new release, FAST RIDE! Join in on the fun with reviews, excerpts, plus a giveaway! FAST RIDE is a spicy, surprisingly emotional, contemporary romance, the first in a brand-new series. Find out what happens when Jen Appleton says yes to a one-night stand in a roadside motel with the hot, hot, hot Garrett Tracy. 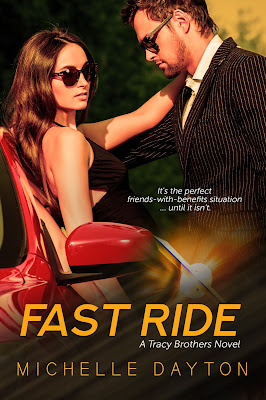 Title:  Fast Ride
Author: Michelle Dayton
Published: April 30, 2018
Publisher: Self-published
Series: Tracy Brothers
Genres: Contemporary Romance
Word Count: 53K
Synopsis:
Jen Appleton is the woman who always says yes. To her boss. To her employees. To charity. To everyone except herself. But when she rear-ends a red Porsche on her way home from a nasty day at work, and the man driving the midlife-crisis cliché turns out to be hot, hot, hot, Jen decides tonight’s the night to say yes to things she’s never said yes to before.

Yes, to a one-night stand in a motel.

Yes, to the hottest night on record.

Yes, to anything Garrett Tracy wants to do to her body.

Garrett knows the chemistry between them can only be described as extreme. But it’s just one night. And then he can get back to work convincing his ex-girlfriend to give him another shot.

When Jen approaches Garrett as the only person in Chicago who might solve her massive work problem, he agrees to help—on the condition that Jen will coach him in winning back his ex. As they work on their projects, Jen and Garrett can’t resist the incredible attraction sparking between them. It’s the perfect friends-with-benefits situation. Until Jen’s heart finally forces her to start saying no.

This was my time reading Michelle Dayton and I loved this book! Jen is one of the quintessentially nice people who just doesn't say no to anyone; which is the reason why it seems that some people might take advantage of her, especially in the workplace. Garrett's professional life is on track like gangbusters, but his personal life is a hot mess. But from the moment he meets Jen, the chemistry between them is hot like fire, and they have no issues with letting it go and just being. Until it begins to feel real.

What I liked about this is that neither Jen nor Garrett went into the arrangement with any ulterior motives; they vowed to help each other with their respective potential relationships. We get to see them in settings that don't include any sexy times and that's one thing I like to see in a book: the growth of a relationship when the couple is still fully clothed. Of course neither one expected any sort of romantic feelings to develop, but feelings did happen. I will say I was surprised by a certain turn of events because I just knew the story was going to go in one direction, so when it didn't I felt a bit betrayed lol. Then I realized why the story went the way it did and I calmed down enough to finish the book and I was more than happy with how the story ended.

There are only three things Michelle Dayton loves more than sexy and suspenseful novels: her family, the city of Chicago, and Mr. Darcy. Michelle dreams of a year of world travel – as long as the trip would include weeks and weeks of beach time. As a bourbon lover and unabashed wine snob, Michelle thinks heaven is discussing a good book over an adult beverage