We are so excited to be bringing you the release of SUNDAYS ARE FOR HANGOVERS by K Webster and J.D. Hollyfield. You don't want to miss this brand new enemies-to-lovers romantic comedy--be sure to grab your copy today!

About SUNDAYS ARE FOR HANGOVERS

For nearly a year, they’ve been at war.
Cops.
Forks.
Eggs.

Two feuding neighbors who couldn’t be more opposite, forced to live next door to one another. Neither is backing down.

She drives him crazy with her loud nineties rap music.
He gets under her skin the way he obsesses over his stupid lawn.

She fantasizes about having sex with the sexy nerd—but with duct tape over his dumb mouth.
He has dirty dreams of the bombshell beauty where he bangs the crazy right out of her—nightmares of course.

Anger isn’t the only thing heating up between these two.
They think this is a battle only one of them can win…
The growing attraction between them, though, seems to be far more stubborn than the two of them combined. 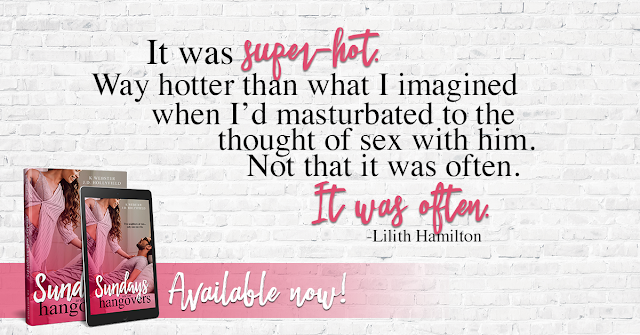 Read an excerpt from SUNDAYS ARE FOR HANGOVERS

K Webster is the USA Today bestselling author of over fifty romance books in many different genres including contemporary romance, historical romance, paranormal romance, dark romance, romantic suspense, taboo romance, and erotic romance. When not spending time with her hilarious and handsome husband and two adorable children, she’s active on social media connecting with her readers. Her other passions besides writing include reading and graphic design. K can always be found in front of her computer chasing her next idea and taking action. She looks forward to the day when she will see one of her titles on the big screen. Join K Webster’s newsletter to receive a couple of updates a month on new releases and exclusive content. To join, all you need to do is go here.

J.D. Hollyfield is a creative designer by day and superhero by night. When she’s not cooking, event planning, or spending time with her family, she’s relaxing with her nose stuck in a book. With her love for romance, and her head full of book boyfriends, she was inspired to test her creative abilities and bring her own stories to life. Living in the Midwest, she’s currently at work on blowing the minds of readers, with the additions of her new books and series, along with her charm, humor and HEA’s.