RELEASE BLITZ - Never Got Over You by S.L. Scott 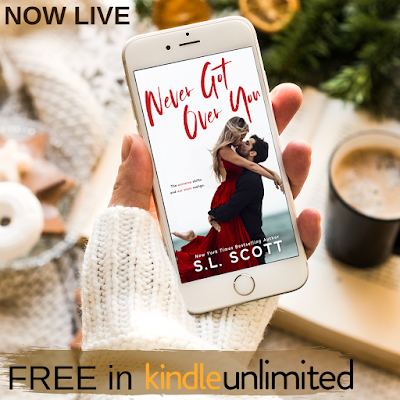 Release Date: January 14
The universe shifts, and our stars realign. 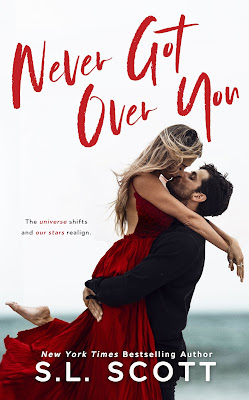 I’d sworn off men. And then I met Nick Christiansen.

Technically, I fell for him, literally, the moment I landed in his quarterback-sized arms and looked into those soulful eyes. I blame the rum. Or was it tequila?

Spoiler alert: It was those delectable dimples.

Either way, Nick was stupidly handsome and ridiculously charming. He held me like he cared and listened to me like I mattered. Captivated by great conversation and rock-hard abs, Nick had me reconsidering the “No Men” promise I’d made myself.

I still regret walking away the next day.
~
I can’t stop thinking about the one who got away. But then I run right into Natalie St. James.

She’s still unwittingly gorgeous, if not more so, and as wildly quirky as I remember.

Sidebar: She’s on a date.

What do I expect? For her to still be thinking about me?

I still regret what happens next.

We didn’t get the love story we deserved the first time, then I screwed up our second chance. When the universe shifts and our stars realign, is the third time a charm? 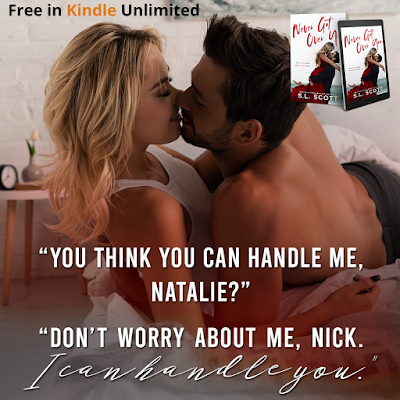 He shoves his hands in his pockets and rocks back on his heels. “About that date? The offer still stands if you’re up for it.”

Checking my watch, I purse my lips in thought. “I don’t know. I’m coming off a bad date, so that puts a lot of pressure on you to redeem my night. If you don’t, that will be two bad dates in one night. Might be a record.”

“I’m up for the challenge.” I knew he was, but I love that he takes the bait . . . I mean, up to the task. When he looks at me, it’s as if he sees my thoughts, and my cheeks heat in response. Taking a few steps closer, so close that my eyes dip closed as if I’m about to be kissed, he says, “As I see it, we have several options.”

Playing off how bad I just misread that situation—again, I might add, recalling the last rejection from him that I barely survived—I tap my eye as if dust invaded the corner. “Sorry,” I reply, blinking like a crazy person. Lowering my arm, I latch my good eye onto him. “Several options, you say? Do tell.”

He gives me a second full once-over and then rubs the pad of his thumb over his bottom lip as if he’s devising a plan. The intensity of his eyes lands back on me. “We can get a drink at a nearby bar. Or maybe you’re up to hang out at my hotel suite . . . or your place. Whatever you want to do, I’m all yours.”

A smirk splits his lips. “Since Catalina, but that’s old news, and I want to hear about the new you.”

“Natalie in New York versus you in California.”

Undecided on what I want to do, I look down the street one way and then the other, but with him standing so close, his scent has our past trickling back into my memories. I turn back to face him. “I know a place not too far from here. It’s low-key at this hour, but then turns into an after-hours dance club.”

“Then we have ourselves a date.”

We make it to the corner before he says, “You look good, by the way.”

“Thanks. You aren’t so shabby yourself.” The sound of his laughter is addicting, and don’t get me started on that cute smile. I’d almost forgotten about those dimples.

He playfully knocks his elbow into mine. “Looking on the bright side paid off.”

“You told me that if we look on the bright side, we won’t be strangers the next time we meet. And here we are—not strangers.”

“At the time, it was one of my wiser pieces of free advice.”

“I’d tell you to get my phone number. Much wiser, but you know, we could reintroduce ourselves and share our numbers just in case one of us goes MIA.” Hint. Hint. Hint.

Do you listen on Audible? Grab it here!
Narrators: Aiden Snow & Brooke Bloomingdale 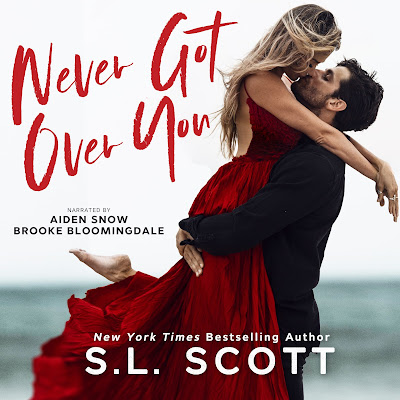 New York Times and USA Bestselling Author, S. L. Scott, was always interested in the arts. She grew up painting, writing poetry and short stories, and wiling her days away lost in a good book and the movies.

With a degree in Journalism, she continued her love of the written word by reading American authors like Salinger and Fitzgerald.

She was intrigued by their flawed characters living in picture perfect worlds, but could still debate that the worlds those characters lived in were actually the flawed ones.

This dynamic of leaving the reader invested in the words, inspired Scott to start writing with emotion while interjecting an underlying passion into her own stories.

Living in the capital of Texas with her family, Scott loves traveling and avocados, beaches, and cooking with her kids. She's obsessed with epic romances and loves a good plot twist. She dreams of seeing one of her own books made into a movie one day as well as returning to Europe. Her favorite color is blue, but she likens it more toward the sky than the emotion. Her home is filled with the welcoming symbol of the pineapple and finds surfing a challenge though she likes to think she's a pro.