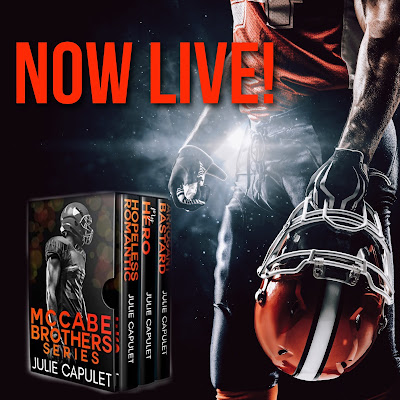 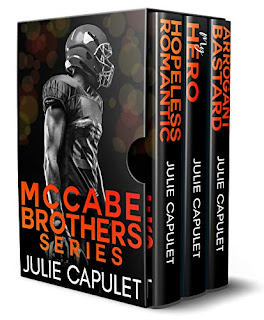 Hopeless Romantic
Quarterback Bo McCabe stops playing in the middle of a game to stare at the shy, beautiful “Jumbotron Angel.” But who is she? Bo will stop at nothing to find out if she’s the one he’s been saving himself for all along. But it won’t be easy, especially when his quest goes viral.

My Hero
Combat hero Caleb McCabe just returned from a tour of duty in Afghanistan. He feels like an outcast in civilian society. When he meets a gorgeous, fun-loving psychology student named Violet, he knows he can’t handle a relationship, especially with a golden girl like her. But no matter how hard he fights his obsession, he can’t stop himself. He knows in his heart she’s the one. But will Caleb’s dark damages get in the way of their HEA?

Arrogant Bastard
Gage McCabe used to be a playboy. Until he meets the one woman he can’t have. Now he’ll do anything to get her where he wants her … 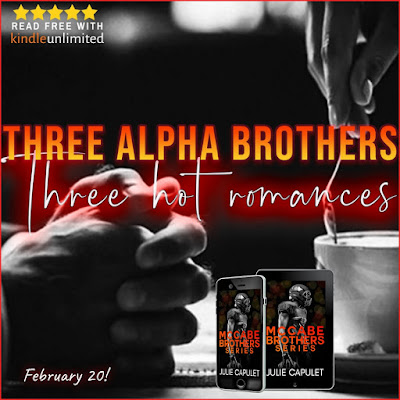 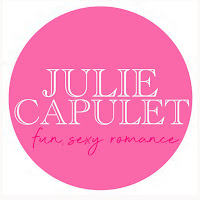 Julie Capulet writes fun, sexy romance starring obsessed alphas and the sweet and sassy women who bring them to their knees.

Her stories are inspired by true love and she’s married to her own real life hero.

When she’s not writing, she’s reading, walking on the beach, drinking wine and watching rom-coms ♥